When Donald J. Trump was elected into office on Nov 8th 2016, it truly shocked, and cost, globalists, Wall Street investors, the mainstream media, pollsters and campaign managers. Billions of dollars had flowed through long-standing industries in order to cinch big payoffs. They expected booms in bank accounts (George Soros famously lost a billion in Wall Street bets that day), major business contracts and a whole slew of promised connections through promised wins. Those wins would control the purse strings to trillions of taxpayer dollars.

There was another hidden cost. It was near deadly to the trillion dollar “Election Network,” the fleet of industries investors have traditionally relied on to ensure their candidate’s or Proposition’s success. They include everyone from campaign managers, consultants, Crowds on Demand (the paid crowds that come with a promised TV connection, run by a Democrat who won CA Governor Jerry Brown’s race with these on-demand actors), right on up to the News Media.

The American people know nothing about the Election Network, which is exactly why they’ve been able to guarantee a candidate’s success for nearly 25 years now.

But make no mistake: investors and donors have continuously relied on these Election Networks to deliver. They do not lose.

But on Nov 8th 2016, those donations, and the Wall Street bets based on those predictions, tanked. And more importantly, they tanked to a name that didn’t spend a dime on those networks. At all. It threatened their very existence. It exposed the truth: money just might not be needed… to win an election.

It might just take something else. Something that doesn’t cost anything.

Billions lost. Trillions in investments. On November 8th 2016, a Global Empire of money and investments were asking:

Are the Election Networks over?

But when the Globalists turned their gaze to the Elections Networks in anger, their gaze fell hardest on one section: the News Media.

The News Media’s number one job is to convince Americans that, no matter what their politics, they get unbiased facts from them. “We may have different politics, but we’d never lie about where to get the best hair dye.”

And Americans believe them because of Election Night. Election Night is when, no matter Blue or Red, all the stations report the outcomes fairly. Right? So the Globalists have their trust, and their unmitigated buying power, for the rest of the year.

But what happens when the the Media gets all the polls wrong? When they don’t get any of the stats right? What happens when the outcome reveals that their politics are actually affecting data? “What does that say about the other data they are giving us? Is that data tainted too?”

Elections are the key.

But on November 8th 2016, the whole sales model wobbled.

That could not happen again.

This is the story of what the News Media was willing to do, to keep America’s buying power, I mean, trust…

Reeling from an election they didn’t understand, the heads of global media outlets, worried about their jobs, needing a solution, gathered at their global conference, the News Xchange in Copenhagen, and titled the event: “Are We Out of Touch?”

Determined not to lose again, they hired their arch nemesis as their Keynote Speaker to answer that question for them. And boy, did he ever.

Nigel Farage was the head of Britain’s UKIP Party, which was responsible for leading the Brexit vote to victory. They hated Brexit. They were Globalists, pure #UN21 to the core. Brexit was a nation-state movement. It was a hard pill to swallow asking him to speak, especially less than a month after Trump’s victory. But they had a feeling he just might spill the beans on the secret sauce to this “populist movement” in his elation.

And they were right. That’s exactly what he did.

What did he say the Secret Sauce to this amazing “nation-state” movement was?

“If it weren’t for YouTube, the UKIP Party wouldn’t even exist! So thank you!” said Nigel Farage. Oh. My. God. They listened. And they listened good…

People think they know what the Conservative Sweeps are. They don’t.

From a technical standpoint, Conservative Sweeps are basically censorship campaigns across all online platforms. They attacked any and all forms of “unwanted thought patterns” from appearing online. That included WordPress, Reddit Boards, YouTube Channels, Twitter accounts, Google search results and more.

In 2017 they began with demonitization, Shadowbanning and downranking. By 2018 they were simply deleting pages, accounts and Channels before they were even launched.

The tactical definition: the Conservative Sweeps were designed to prevent a new populist political party from forming in the United States.

You see, in America, congressmen are always re-elected. They are never replaced. Once a congressmen gets in? They are in for life. They are the most corrupt, and most valuable players on the planet…

Coming into Nigel Farage’s speech, the Media and Globalists may have been worried about a Republican win in both the House and the Senate, that they couldn’t call in the exact numbers they were looking for.

But instead, Nigel presented them with a much larger, and darker picture. If you’ve watched my How They Fooled Us Video, or even my Rand Paul video, you’ll know that the Establishment GOP is nearly as communist as the Democratic Party.

The idea of a whole new party of independent candidates flooding the Primaries was a nightmare scenario worse than they had imagined. Not only could they not predict the numbers… But they might- might! Not own the candidates.

They had not expected that.

And so they prepared. Hard. You can tell just how high the stakes were, by the utter devastation they caused.

The Online Companies rolled out the Sweeps. And the Media refused to report the Primaries. That is… until Clean the GOP began.

The Conservative Sweeps worked- almost. Candidates across the country complained to the GOP Chairwoman that their media campaigns were shut down before they could begin: Click Here.

The GOP itself sued, and in some terrible cases, cruely tricked candidates off the primary ballots. But it didn’t work. There were too many. And in the end, most incumbants found themselves face to face with contenders for the first time in a long time during their GOP Primaries.

The media tried to keep it a secret. They focused on the Midterms during their coverage all 2018. My videos reflect it. “Save the Vote!” I said, in April of that year. And I talked about the Midterms in November instead.

I began #CleantheGOP.
With 39 states left in the Primaries to go.

I jumped online, read off all 50 states Primary Election dates, and said “Hey- you probably better look at what your incumbent is doing, and compare them with who is running.”

And it was all over. 4 to 1 incumbents overturned.

I didn’t say to vote for Trump candidates. I said to vote for Freedom of Speech, because that was under threat. And a lot of different political beliefs fall under that… except for communism. We can all fight that as one.

Did the media report any of these wins? NO.

But thankfully, since that April video, I had been pushing voters who cared about a trustworthy vote, considering what we learned from the Project Veritas 2016 Election Videos, to man the polls and be on the lookout.

So you were there. You saw the counts. You saw the candidates. You knew the results in each district. But the media didn’t say anything.

That should have prepared us for what happened on Nov 8th 2018.

If you haven’t seen my video recap of the Midterms yet, you should. I coin the term Freedom Fighters, which went mainstream at the Restoration Weekend. Good.

In the meantime, here is the thread I wrote on Twitter that caused some shock waves. Enjoy. (Reads from bottom to top.) 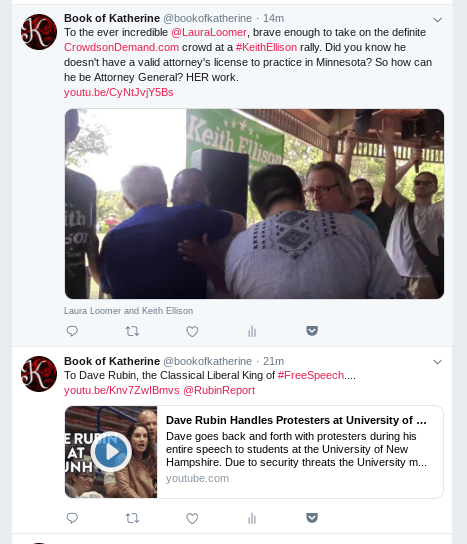 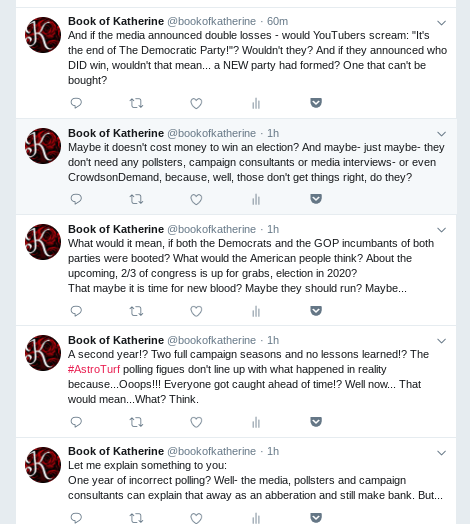 Get in a car. Hop on a plane. Travel to DC. Travel to your State Capitol. See for yourself in person. Trust what you can see, touch and talk to. Never trust the Matrix.