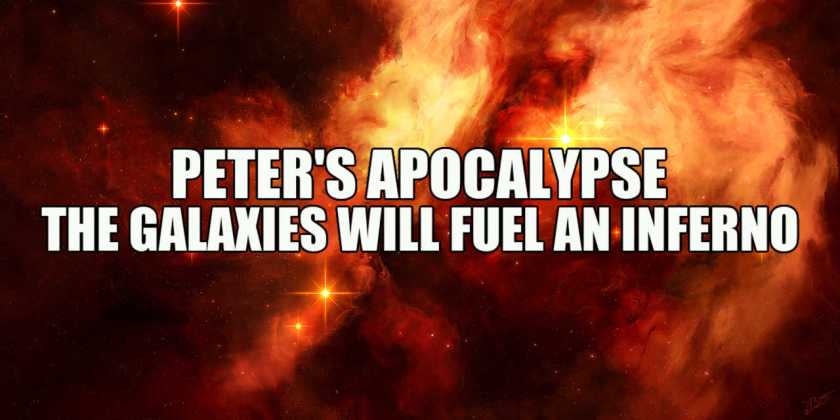 “First off, you need to know that in the last days, mockers are going to have a heyday. Reducing everything to the level of their petty feelings, they’ll mock, “So what’s happened to the promise of his Coming? Our ancestors are dead and buried, and everything’s going on just as it has from the first day of creation. Nothing’s changed.”

They conveniently forget that long ago all the galaxies and this very planet were brought into existence out of watery chaos by God’s word. Then God’s word brought the chaos back in a flood that destroyed the world. The current galaxies and earth are fuel for the final fire. God is poised, ready to speak his word again, ready to give the signal for the judgment and destruction of the desecrating skeptics.

Don’t overlook the obvious here, friends. With God, one day is as good as a thousand years, a thousand years as a day. God isn’t late with his promise as some measure lateness. He is restraining himself on account of you, holding back the End because he doesn’t want anyone lost. He’s giving everyone space and time to change.

But when the Day of God’s Judgment does come, it will be unannounced, like a thief. The sky will collapse with a thunderous bang, everything disintegrating in a raging inferno, earth and all its works exposed to the scrutiny of Judgment.

Since everything here today might well be gone tomorrow, do you see how essential it is to live a holy life? Daily expect the Day of God, eager for its arrival. The galaxies will burn up and the elements melt down that day—but we’ll hardly notice. We’ll be looking the other way, ready for the promised new heavens and the promised new earth, all landscaped with righteousness.

In the last days mockers will come with their mocking, following after their own lusts, and saying, “Where is the promise of His coming? For ever since the fathers fell asleep, all continues just as it was from the beginning of creation.” For when they maintain this, it escapes their notice that by the word of God the heavens existed long ago and the earth was formed out of water and by water, through which the world at that time was destroyed, being flooded with water. But by His word the present heavens and earth are being reserved for fire, kept for the day of judgment and destruction of ungodly men.

But do not let this one fact escape your notice, beloved, that with the Lord one day is like a thousand years, and a thousand years like one day. The Lord is not slow about His promise, as some count slowness, but is patient toward you, not wishing for any to perish but for all to come to repentance.

But the day of the Lord will come like a thief, in which the heavens will pass away with a roar and the elements will be destroyed with intense heat, and the earth and its works will be burned up.

Since all these things are to be destroyed in this way, what sort of people ought you to be in holy conduct and godliness, looking for and hastening the coming of the day of God, because of which the heavens will be destroyed by burning, and the elements will melt with intense heat! But according to His promise we are looking for new heavens and a new earth, in which righteousness dwells.

There shall come in the last days scoffers, walking after their own lusts, saying, “Where is the promise of his coming? Since the fathers fell asleep, all things continue as they were from the beginning of the creation.”

They are willingly ignorant that – by the word of God – the heavens were of old and how the earth was standing out of the water, and in the water. Or that the world that was before, being overflowed with water, perished. But the heavens and the earth which are with us now, by the same word, are kept in store and held. They are reserved unto fire against the day of judgment and perdition of ungodly men.

The Lord is not slack concerning his promise, as some men count slackness; but He is longsuffering toward us, not willing that any should perish, but that all should come to repentance.

But the day of the Lord will come as a thief in the night; in the which the heavens shall pass away with a great noise, and the elements shall melt with fervent heat, the earth also and the works that are therein shall be burned up.

Seeing then that all these things shall be dissolved, what manner of persons ought ye to be in all holy conversation and godliness, looking for and hasting unto the coming of the day of God, wherein the heavens being on fire shall be dissolved, and the elements shall melt with fervent heat?

Nevertheless we, according to His promise, look for new heavens and a new earth, wherein dwelleth righteousness.

MORE ON THE APOCALYPSE